Woof, the last wicklog was in January? I really let these slip. However! I have been writing. A lot. Out of the avenues for getting funding, I think that grant-writing is the best choice for CL. Grants are hefty, don’t come with many strings, and usually have for-public-good goals that line up well with CL’s educational aspects.

I wrote a grant about a year ago to get a sense of the process. As expected, I didn’t get it. They told me that they loved the idea, but I needed a business plan. Which was fair —I didn’t really have a plan beyond “I dunno, sell it to people, I guess?”.

So I’ve spent the intervening year talking with folks working in edu games get a sense of what works business-wise (and to make friends!). Cold-calling, setting up meetings, and going to socials was NOT AN EASY THING for me, an introvert who once bussed across town for a meetup, saw that it was in a ~bar~, and got so scared that I turned around and got on the bus going back. Emailing a handful of people to ask for something is usually a full day’s work for me.

So I’m hecka proud of myself and thankful to the folks I worked with, because we pulled all this together into a finished Grant Proposal #2: Operation: Get Crescent Loom Into Classrooms:

(It was an SBIR application to the Department of Education, for reference)

These fifteen pages (plus a stack of supporting materials, e.g. budget) are a culmination of the last year’s worth of work, including a business plan that I think will be able to thread the needle between profitability and making it available to low-resource organizations.

I think we have a solid shot, but these grants are very competitive (I think they select ~12 out of 500 applications). Even if they don’t go for this one, I now have a good footing for future shots.

They’ll let us know about the grant on June 20th, so I have a few months to do some free-form tooling around with the design. I want to 1) make it run faster so there can be more critters on the screen, and 2) experiment with different layouts to make the initial contact with the brain stuff more intuitive.

There’s always a balance between what to simulate and what to simplify. I’ve taken the tactic of initially simulating as much as I could and then paring away what is unnecessary. I think simulated action potentials traveling down axons is now on that cutting block.

It used to be that you could see a pulse of activity travel along an axon, like so:

But setting up simulation values such that they worked for both the very-fast, very-large conductances of an action potential AND the slower dynamics of a cell body was difficult; it forced me to average things out so action potentials were slow enough that the simulation time-step could catch them. It also added a bunch of math overhead to calculated current flowing through these long wires.

So I asked myself: what does simulating them add? I think it’s really cool to be able to see the chain-reaction of a pulse going down the length of an axon, but functionally, is it worth it to do 20X more work to get “A activates B” to be a little more fancy? By treating it like a single unit, I cut out a ton of overhead and can get them to fire at slightly-more-realistic rates:

I have a few reservations:
1) I like how the original animation looked a LOT more.
2) There is an intuition that players have that pulses take longer to travel down longer connections, which is actually correct and is lost in this new simplification.
3) You won’t be able to stimulate any part of an axon anymore and see a pulse travel outwards from that, which I thought was the coolest way to understand what axons were actually doing.

But I’m pretty sure I can cheat most of these back in with a more-simple hard-coded mechanisms. It’s not as elegant, but pursuing structural elegance over usability is one of the deadly programmer sins.

As far as different layouts go, I’ve never been happy with how separated the brain is from the body. It’s a hold-over from the very earliest designs of the prototype, but I haven’t found a better solution yet. But I would love it if instead of working on the brain floating off next to the creature, you could zoom into the creature and work there. Something like this:

There’s a lot of challenges of this design (how do you see what’s going on in both the creature and brain at the same time?), but I’ll play around with it to see how it feels.

I wanted to get a better picture of where I was in my process, so I made a timeline of CL’s development thus far:

I’m a little surprised at how little time over the last two years I’ve actually spent working on it full-time. A bit after the kickstarter, a bit at Stugan, but wrangling with business stuff and writing and day jobbing has meant that it’s been only a bit under 50%, overall. Hopefully getting more resources with the grant will help stabilize things?

Where is our Steam for education?

These are my compiled notes from talking with a bunch of folks about how to make a living working on educational games. Unless something’s in quotes, it’s paraphrased.

“If there’s a good easy solution, I haven’t found it and I’ve been searching for two years.”

“If you want to make money, go make Math Blaster.”

END_OF_DOCUMENT_TOKEN_TO_BE_REPLACED

Before starting game development, I tended to have this notion that, once completed, art sorta existed in a vacuum. High-school-Wick at one point argued that you could seriously judge a piece of art on its own merits, regardless of the context in which it was created or the artist’s intentions.

I now appreciate how the environment that a piece of art is designed for totally dictates the shape of that art. These are design decisions that are so fundamental, that feel so natural, they’re invisible unless you’re looking for them. One of the reason Charles Dickens’ books are engaging is that he ends most chapters on a cliffhanger — due to the fact that he originally wrote the chapters for magazines and needed to get people to buy the next one.

In games, the most clearest example of this is the concept of “lives”. Needing to start a game over from the start if you fail a few times wasn’t something a designer came up with because they thought it would enhance the experience; it’s because it drove people to insert more quarters in the machine to buy more lives to continue their game.

An arcade machine’s entire design — lives, levels of increasing difficulty, high score lists, colorful graphics — is molded around its business model. This isn’t inherently a bad thing; you can find games that worked with this structure to tell a story (such as in Missile Command, which was developed during the height of the cold war and whose mechanics demonstrate the inevitability of mutually assured destruction). However, the structure itself is unyielding. The economics demand it.

END_OF_DOCUMENT_TOKEN_TO_BE_REPLACED

Common wisdom says that most of the time campaigns see a big spike at the start, have a big plateau in the middle, and another spike at the end.

What happened? Lemme back up and give some context to what things were like right before that huge jump.

END_OF_DOCUMENT_TOKEN_TO_BE_REPLACED

That is to say, ah, it’s been a busy couple days. Weeks. I don’t even know any more. @_@ I’m tired and sleep-deprived but it’s coming together and (despite the wretched political situation) I have a spark of hope and excitement in my heart.

This’ll be a bit of a pre-mortem.

Whatever happens in the next few days is gonna have a huge effect on the course of my life. Making an interactive neural circuit game has been a dream of mine for almost a half-decade. I believe that Crescent Loom has an enormous potential to teach and do some good in the world.

Fingers crossed, into the breach we go. See you on the other side!

Over the last month, we’ve done a couple of experiments in publicity. Starship Rubicon was in the Bundle Stars Trinity 3 Bundle, we run a couple of Steam Visibility Rounds, started releasing Steam Coupons, participated in the Steam Exploration Sale, and put out a demo. My notes ended up being longer than I expected, so I’ve split things up a bit. Here’s my take on how the bundle went:

END_OF_DOCUMENT_TOKEN_TO_BE_REPLACED

(Note: Valve has asked us to not share our exact sales numbers. I feel like that takes a bit of the teeth out of a postmortem, but there are still plenty of lessons to be shared)

I was going to write a standard postmortem for Starship Rubicon— explain what we tried, show some stats, and pull out some lessons. I’ll do some of that later, but I think I’m starting to realize that any specific tips I can share is less important than something else I learned.

Steam traffic is a gigantic morass — having my game on the front page that first morning felt like timidly standing in the empty floor of the stock exchange moments before it opens. Suddenly, before I can take a breath, the wave of humanity hits. One million (1,000,000) views on the front page, Steam promises. It only took a couple hours. Store page clicks were two orders of magnitude lower than that.

Not gonna lie, I was disappointed. I’d seen the ocean and only felt a drop. END_OF_DOCUMENT_TOKEN_TO_BE_REPLACED 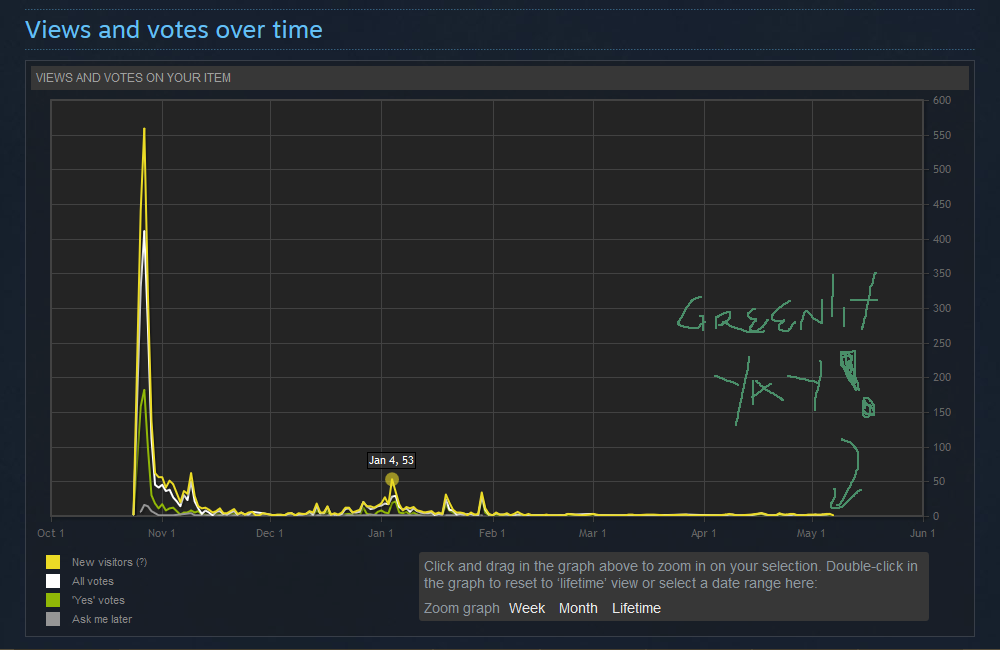 I think our traffic graph speaks for itself. We had a huge initial surge (I assume from being on the front page of Greenlight for being “recently submitted”) which QUICKLY dropped off over the week as we moved further and further away from the front page. The later minor spikes came from exposure through Let’s Players and Twitch streamers (huge shout out to Stream Friends, Maris from GamerQuest, and many others).

Then came what is only known as the Dark Times, where we weren’t actively promoting it and were more-or-less sitting pretty at a steady ~40% of the way to the top 100. We were banking on getting more bumps down the line from doing some conventions and maybe a bundle. Then BAM! Out of the blue, Greenlit! So what on Earth happened??? Why did we get Greenlit when we did? Read on for our best guess:

END_OF_DOCUMENT_TOKEN_TO_BE_REPLACED

Full disclosure on the statistics of Rubicon’s Kickstarter campaign:

:: STATS & COMMENTARY ::
———–
Goal: $2,000
Runtime: 29 days
———–
I set my goal to the absolute minimum I needed to do the project. My expenses were low: I only needed to cover my own cost-of-living and I focused on backer rewards that were mostly free for me to fulfill (emails, beta tester status, adding backer names into the game). After doing the math, I was surprised by what a low number I needed- a lot of video game projects on the site ask for $10,000+. I guess there are perks to doing everything yourself.

[ Press Kit ]
By Olive Perry | © 2020 Wickworks
Proud to be a member of PIGsquad, Playful Oasis, and Explorable Explanations.